The Pebble Time Round has been billed as the world’s lightest and slimmest smartwatch – it weighs only 28 grams and is just 7.5mm thick.

Said Kelvin Kang, 37, General Manager, Leader Radio Technologies Pte Ltd, which brought the Pebble smartwatches into Singapore, “The key feature of the Time Round is that it is currently the lightest and thinnest smartwatch in the world. Time Round also boasts an excellent selection of third party apps, widening its features, and new watch faces are added on a daily basis.” 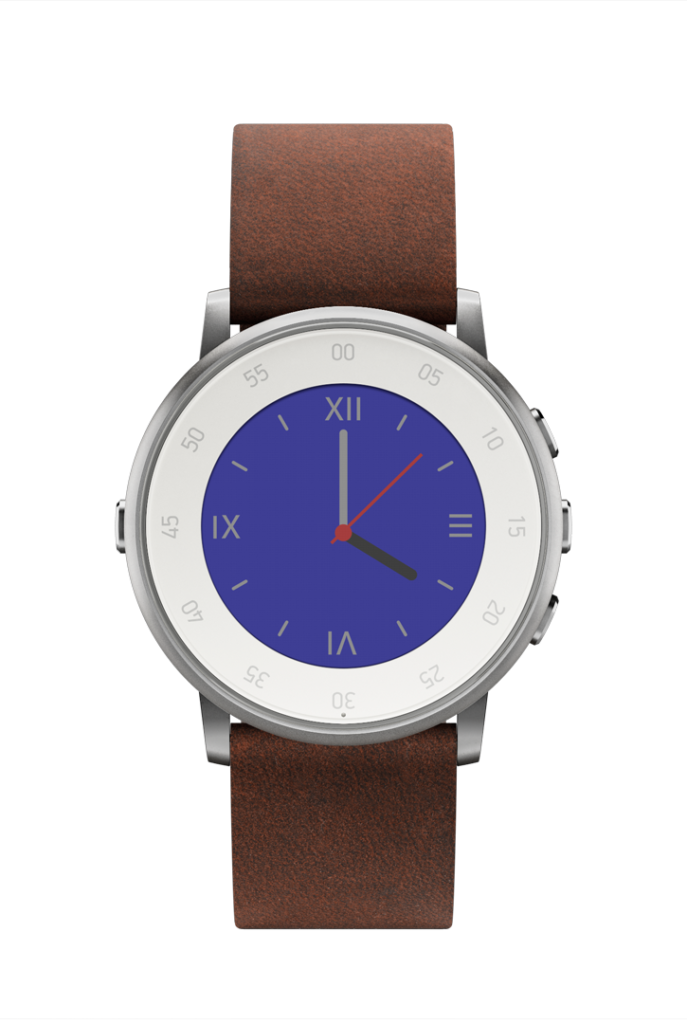 The Pebble Time Round is the world’s lightest and slimmest smartwatch.

A light and slim watch

He added, “The current smartwatch market is trending with thick watch bodies seemingly to be targeting the males in nature. Time Round has been crafted to reach out to females in the modern society, encompassing tech with feminine appeal. But even though the slim shape fits the ladies well, the watch design is unisex in nature, and this narrows the gap between conventional and smartwatches too.”

In fact, a female designer had even been brought in by Pebble to check out colours, prototypes and finishes before deciding on the current look and feel for the Time Round model to create a watch that can feel fashionable yet at the same time, has smart features.

Thanks to Pebble, I recently had the chance to review the Pebble Time Round. My first impression of the watch was that it was definitely light and slim, and so, I could barely feel it when I wore it, so sometimes forgot that I even had it on. The smart leather watch strap also adds to the elegance of the Time Round watch, though do note that this material may get sweaty in Singapore’s temperature. 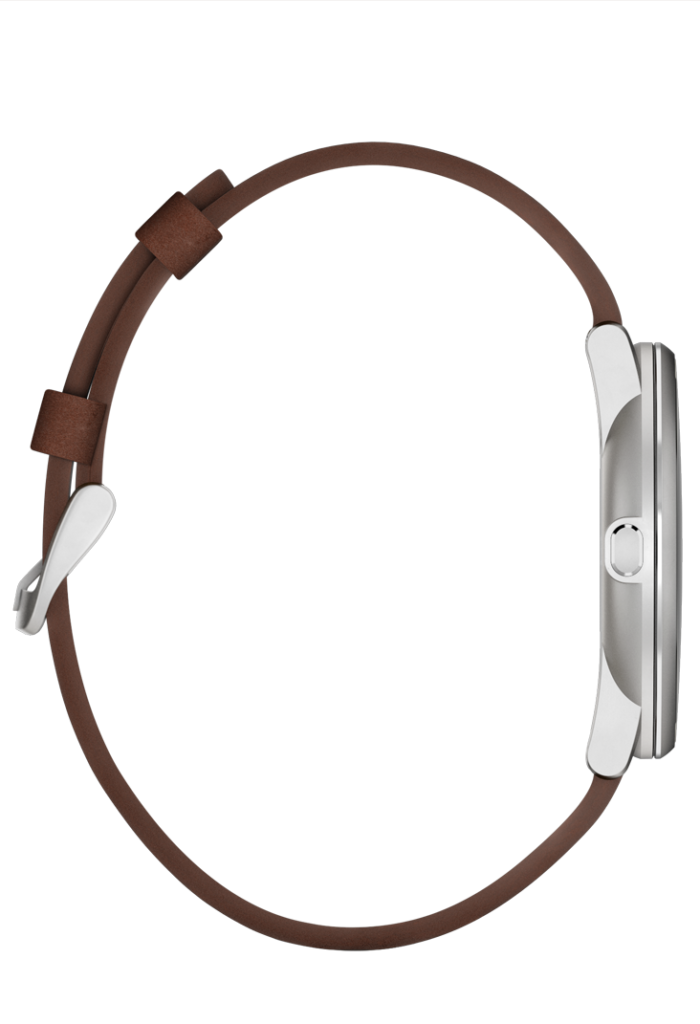 My first impression was that the watch is definitely very light & slim. This is the side view.

I liked the fact that the Time Round can fit nicely and snugly under long sleeves without bulging and appearing bulky. This design feature will probably appeal to office ladies too.

Easy to sync to your smartphone

The Time Round is quite easy to set up and sync to your smartphone upon downloading the Pebble app, which is free and available on both iPhone and Android platforms.

Added Kang “The watch also has its own app store, offering users the choice to custom their watch faces and utilise their favourite apps.”

When I checked out the Pebble App Store, the first thing that I noticed was the large variety of watch faces available to cater to different moods. I had a field day choosing a suitable watch face. There were plenty of versions available and these ranged from the simple and basic analogue faces, to digital ones, and even those based on your favourite characters such as the beloved R2D2 from Star Wars. As I love Star Wars, I eventually settled on the R2D2 face, which had a cute R2D2 droid with the ability to move his head. 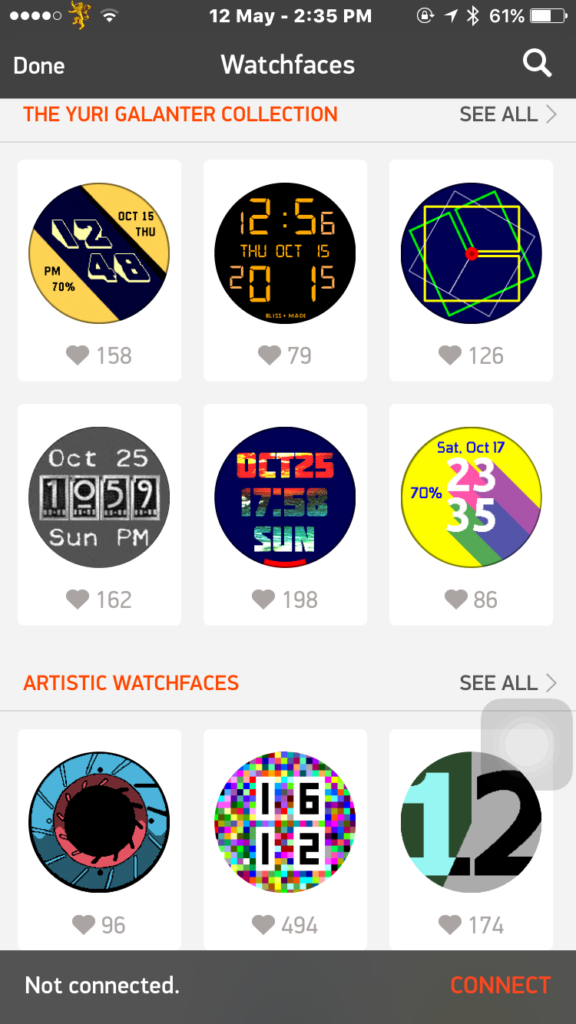 There are lots of watch faces available on the Pebble Store app.

The apps on the Pebble Store range from useful ones such as bus timetable apps, to productivity ones such as Notes apps as well as games such as Pebble’s own version of the popular Flappy Bird mobile game. However, there are a few leading apps such as ESPN and Jawbone which do not seem to have a Pebble version, so this may be a tad disappointing for some who are users of such apps.

Do note too though, that if you have several apps downloaded onto your Time Round watch, some degree of scrolling may be needed to search for and use the apps – as only one app can be displayed on the Time Round’s small screen at one time.

Overall there are more than 150 watch faces and about 400 apps available on the Pebble Store. 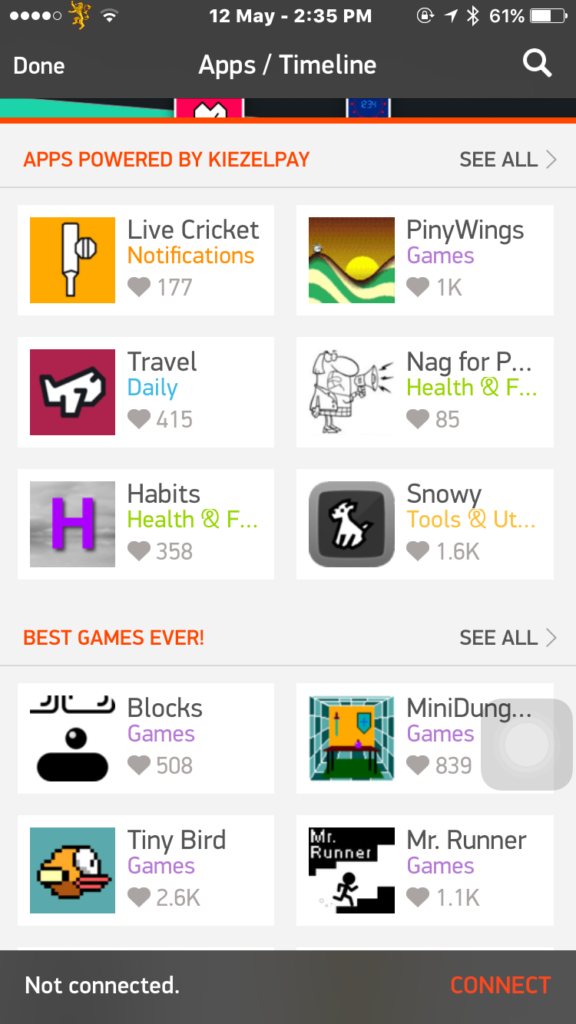 There are also games and some useful apps on the Pebble Store.

Will not miss out on essential notifications

The Time Round definitely lives up to its billing of a smartwatch that keeps you updated at all times. When you wear the Time Round, you should not miss out on any phone calls, WhatsApp messages or other notifications. 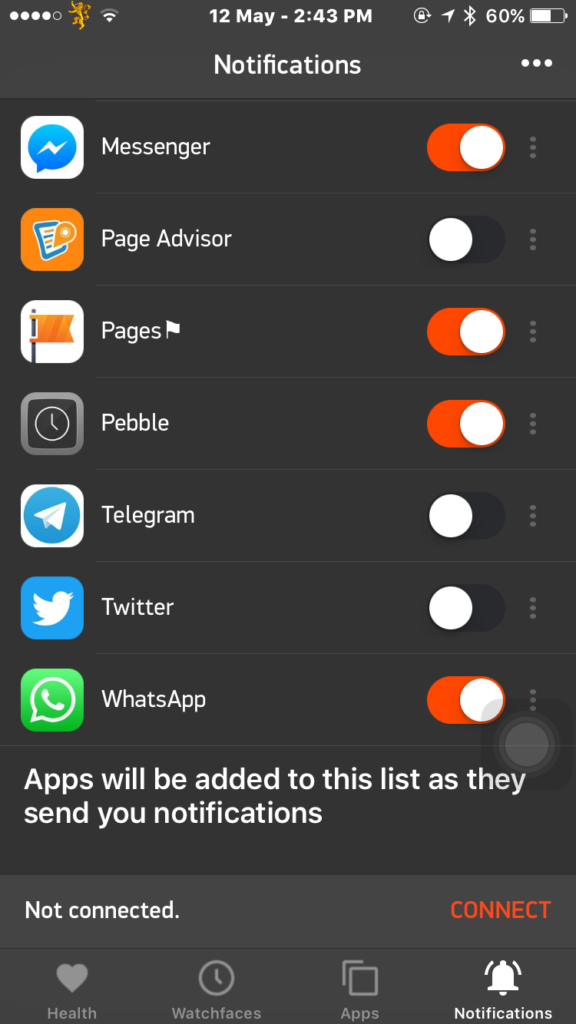 You can choose what notifications you want to receive on the Time Round watch.

And if you want, there is also an option to turn on and off notifications, so that you will not need to be disturbed when for example, you are at an important business meeting. 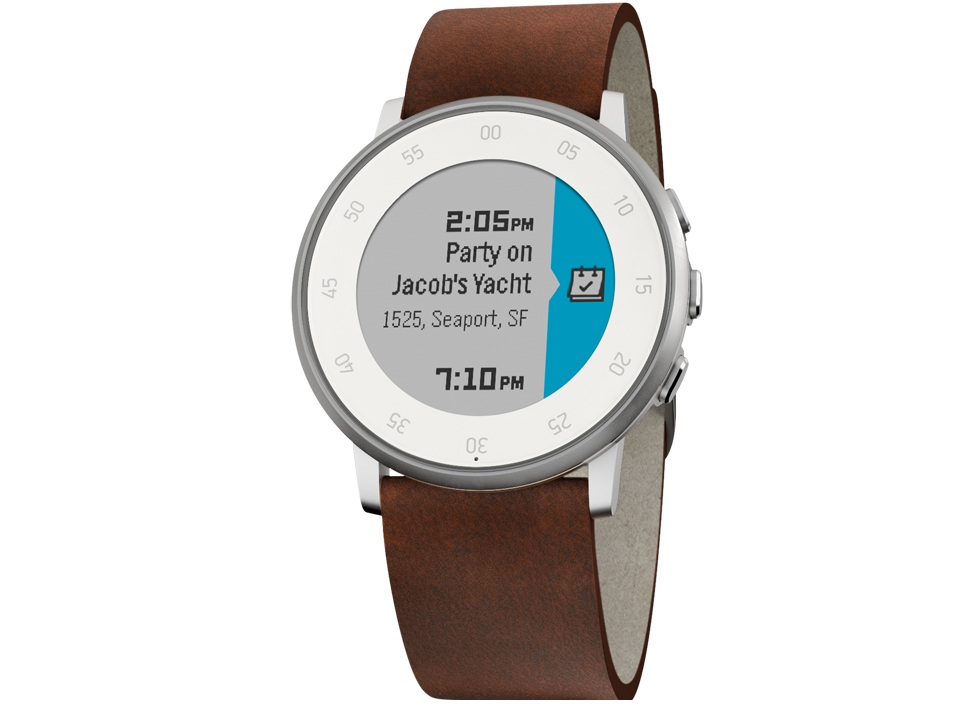 Unfortunately though, I found it a tad disappointing that I could only look at the notifications coming into the Pebble Time Round from my iPhone 6 and then clear them away after I have finished reading them – I could not actually respond to the notifications, for example, using voice dictation to answer my text messages. But I have heard that Android users are able to do so.

According to Kang, the Time Round also has some of the basic features that a fitness tracker has. He said “Pebble Health tracks your steps, sleep and offers a personalised insight of these for the user.”

But it must also be noted that the Time Round cannot fully replace a functional fitness tracker. What it basically does is to give you some general health statistics, namely the number of steps that you have walked each day and your sleeping patterns each night.

You can also get basic health statistics on your Pebble Time Round.
[Image sourced from Pebble Blog]

The steps counter used by the Time Round gives you a rough gauge of your fitness habits and a generic goal to strive towards, though I must say that it may not be the most accurate steps tracker around.

For the sleep tracker, it gives you the number of hours you have slept, and what’s good about the Time Round is that it seems to be able to automatically pick up when you are falling asleep so you don’t have to constantly remember to set it to sleep mode. But this feature is pretty basic. However, it is a rather comfortable watch to sleep with, due to its lightness.

According to Kang, Pebble does not really have any plans to create a fully functional fitness tracker though. Said Kang, “Currently no plans have been disclosed by Pebble USA to build a watch that contains a GPS tracking or heart rate tracking system.”

While I quite liked the “always on display feature,” this may be contributing to the Time Round’s relatively short battery life though. The battery is advertised to last two days, but twice, the battery has died on me after just one day of normal usage.

Fortunately, the battery charges relatively quickly and the watch can soon be used again after that.

However, the watch had once completely crashed on me when I was sleeping and so, I had to do some Googling to figure out how to fix the watch and reset it. This was only a couple of days after I had started using the smartwatch. According to Google, this problem also does appear to be something that a number of Pebble users have experienced.

According to Kang, the Time Round is quite a durable watch but it is not waterproof. This means it should not be taken into the shower or for a swim.

He said “The Time Round has a 2.5D gorilla glass display with splash resistant to IPX7 standard. This means that it is not waterproof. Probably that the watch is more suitable for office and casual surroundings as opposed to an activity like swimming.”

While I have not taken the Time Round into the water, I have washed my hands on several occasions with the Time Round on and splashed water on it, and so far it has coped quite well with the light water splashes. 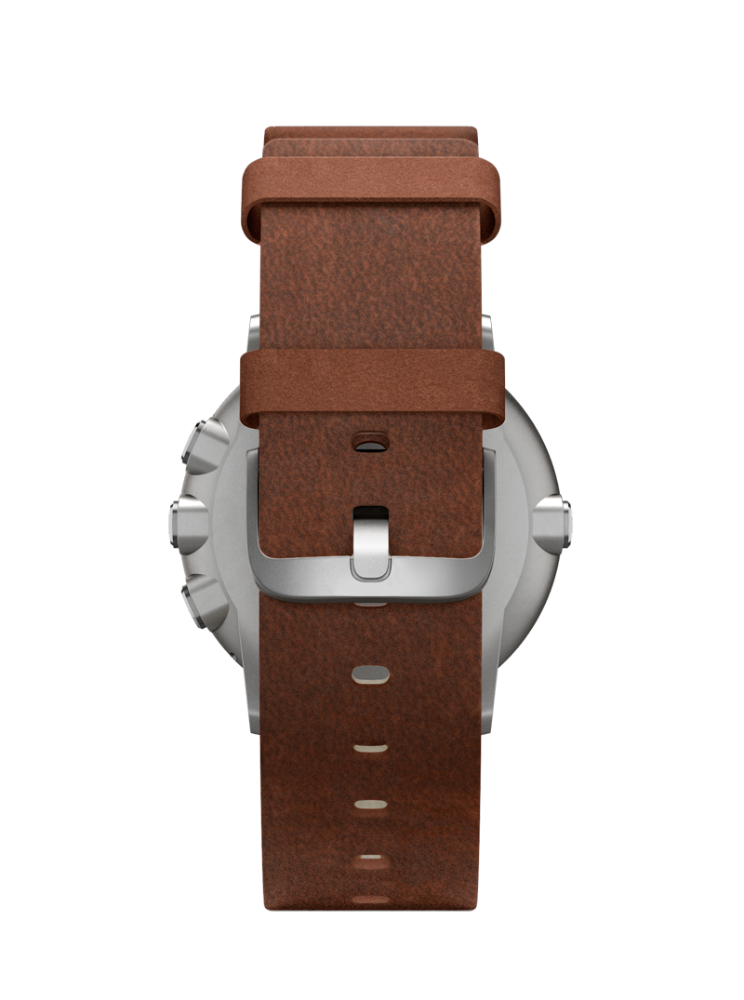 Pebble Time Round is a lightweight and sleek watch.

With its lightweight and sleek design, simplicity and relative ease of use, the Time Round will appeal to those with small wrists who do not like to be weighed down with heavy wearables.

Where to buy the watch

All images of the Pebble Watch are courtesy of Pebble Singapore.